Fried Idli or Masala Idli is a yummy breakfast dish made with leftover Idlis. This is a mildly spiced dish made by sauteing vegetables and idlis in a pan.

This gives a twist to the traditional Idli recipe. If you have any leftover Idlis, then you should definitely try making this recipe. You can adjust the spice level as per your taste.

I'm a big fan of Idli and can eat it day or night with some Sambhar and filtered Coffee. A simple idli recipe is so delicious that you could not get bored of it. Because of its plain flavor, you can experiment by adding different spices.

Idli is a savory rice cake that is a popular breakfast food in southern India. These cakes are made by steaming the batter (made by fermenting the de-husked black lentils and rice). You can also make Instant Idli using Rava/Semolina.

I have made Idli using Rava Idli, but you can use leftover Idli for making the recipe.

Fresh Idlis are usually very soft. When they are cooked for making Fried Idli or Masala Idli, they usually break and leave crumbs. So it is best to use leftover idli. These get a bit hard after getting stored in the refrigerator. This prevents them from leaving crumbs.

You can also pan-fry or deep-fry idlis to make them crisp. If if you want to add less oil, then I would recommend that you use leftover idli as they tend to give a nice texture to the dish.

HOW TO MAKE FRIED IDLI

Idlis are made by steaming the fermented batter of rice & lentils. So that makes idli a healthier treat. They are considered light & has not fat in them. They are high in protein and fiber so are easy to digest too. Fried Ildi has lots of veggies so it is healthy to have it any time of the day.

Even though the name says Fried Idli but still they are not deep-fried. They are just sauteed in 1-2 tablespoon of oil to get beautiful color in them. You can also make them oil-free if you're diet conscious.

Not exactly Fried Idli but plain Idlis do help in weight loss. Being high in protein & fiber they keep you full for a longer time. 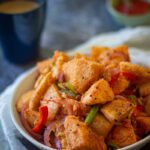