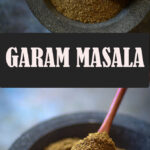 Punjabi Garam Masala is a special kind of spice mix that is used in most North Indian recipes. It is made by roasting the spices and grounding them until smooth, which is used in various recipes.

I use grama masala almost for all of my recipes. So I make a big batch of it. And whenever I'm low in quantity, I quickly make it again. Goes great in curries, potatoes, paneer recipes, and many more.

A fresh batch of Garam Masala tastes great in my Chole/ Chickpeas Curry. Also gives a unique taste to Tamarind Chutney. Love it in rajma, dal makhani, or dum aloo

⭐WHAT IS GARAM MASALA?

Garam Masala is a blend of ground spices used explicitly in Indian cuisines. Garam (which means hot) and Masala (a mixture of whole spices) are used alone or with other types of seasonings.

The recipe differs from region to region depending on taste. However, Garam Masala is the main masala used in all or most Punjabi recipes.

I have tried many brands of Garam Masala, but everyone lacks in flavor and freshness. My MIL gave me her Garam masala recipe, which turns out perfect every time with a few additions. I toast them before grinding them to provide a pleasant aroma to the masala.

* See the recipe card for quantities.

🔪 HOW TO MAKE PUNJABI GARAM MASALA

* For the full recipe, check the recipe card below, but you refer here for step-by-step photo instructions.

First and foremost is to roast the spices. Then, you can sun dry them by placing them directly in sunlight for 2-3 days. Finally, cover with a muslin cloth or a thin towel to save the spices from dust.

Or you can roast the spices on the stovetop. Place the spices in a cast iron skillet and roast at low heat for 3 minutes. You can also roast it in the oven too. Place the spice on a baking sheet and bake at 350 degrees F for 2-3 minutes in a preheated oven.

Let the spices cool down. Then add them in the Vitamix or a spice grinder. And ground them until a fine powder. You can ground the same spice at one time. But if you have a high-power spice grinder, you can mix and pulse the spices.

You can grind cinnamon sticks together, coriander seeds together, then cumin seeds, and so on. Then mix all the spices and pulse them again until fine.

Once all the spices are grounded, add them to a big bowl. Mix all other spices and store them in an airtight container. It stays good for 6-8 months, and use it in curries, lentils, potatoes, and stir-frys.

HOW TO STORE IT?

Once Punjabi Garam Masala is grounded, store it in an airtight container. Masala stays good for 6-8 months in a cool and dry place. For extended use, you can store the masala in the freezer too.

👪HOW TO USE PUNJABI GARAM MASALA IN THE RECIPE?

It depends on the recipe. Some recipes, like chickpeas curry, require more garam masala, while some recipe, like paneer recipes, requires only ¼ teaspoon of it.

But ¼- ½ teaspoon of Garam Masal is enough for most recipes with a serving size of 2-4 people. In addition, Garam Masala will make the curries or lentils more flavorful.

Why Roast the Spices?

You can make this Spice-Mix by roasting the spices or without roasting them. But when you roast them, the flavors will be elevated, and the masala will be more aromatic. You can roast them in the oven or at low heat on the stove. Then, once the spices cool down, you can grind them finely in the spice grinder.

Both spice mix contains most of the same ingredients, but these spices are still far different. For example, the Curry Powder flavor comes from cumin seeds, fenugreek, and turmeric powder. And Garam Masala flavor is mostly about cloves, cardamom, coriander seeds, and cinnamon, making the masala a little pungent and a more robust flavor.

When to add Garam Masala?

Adding garam masala at the end of the cooking is best when the food is almost ready.

🥗 RECIPES THAT USE GARAM MASALA

Rate it by clicking the stars below if you liked the recipe. However, if you want to check what is new in my kitchen, check out my Instagram & Facebook. 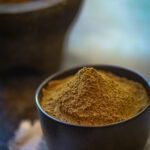 Gari
Punjabi Garam Masala is a special kind of spice mix that is used in most North Indian recipes. It is made by roasting the spices and grounding them until smooth, which is then used in a wide variety of recipes.
5 from 1 vote
Print Recipe Pin Recipe
Share by Email
Prep Time 10 mins
Cook Time 5 mins
Total Time 15 mins
Course Spice Blend
Cuisine Indian
Servings 200 servings
Calories 18 kcal

If you toast the spices before grinding, it gives a nice aroma and masala will be flavorful for a longer time. Once grounded always store in an airtight container, as the smell will not be lost. If not using that frequently you can also freeze it. Freezing the masala will make masala last even longer. Best to grind masala in batches, as this will give an even texture. Otherwise, it may not be that fine, and you will find lumps of spices in it. STORAGE Once Punjabi Garam Masala is grounded then store it in an air-tight container. Masala stays good for 6-8 months in a cool and dry place. For extended use, you can store the masala in the freezer too. HOW TO USE IT IN THE RECIPE It depends on the recipe. Some recipes, like chickpeas curry, require more garam masala, while some recipe, like paneer recipes, requires only ¼ teaspoon of it. But ¼- ½ teaspoon of Garam Masal is enough for most recipes with a serving size of 2-4 people. Garam Masala will make the curries or lentils more flavorful.
Nutrition Facts
Punjabi Garam Masala
Serving Size
1 grams
Amount per Serving
Calories
18
Calories from Fat 9
% Daily Value*
Fat
1
g
2
%
Saturated Fat
0.1
g
1
%
Trans Fat
0.001
g
Polyunsaturated Fat
0.1
g
Monounsaturated Fat
0.3
g
Sodium
3
mg
0
%
Potassium
70
mg
2
%
Carbohydrates
4
g
1
%
Fiber
2
g
8
%
Sugar
0.1
g
0
%
Protein
1
g
2
%
Vitamin A
29
IU
1
%
Vitamin C
0.5
mg
1
%
Calcium
45
mg
5
%
Iron
1
mg
6
%
* Percent Daily Values are based on a 2000 calorie diet.
Keyword garam masala, homemade garam masala, masala, punjabi garam masala, spice mix, spices, whole spices
Tried this recipe?Mention @thisthatmoreworld or tag #thisthatmore!
For other Food Videos!Check out ThisThatMore!