Paneer Tikka Masala is an aromatic and flavorful dish made by adding marinated & grilled paneer pieces in onion- tomato curry, with some aromatic spices.

When you attend any wedding in India, Paneer Tikka is always there in their menu. They grill marinated Paneer pieces in Tandoor (Brick Oven) and serve Paneer Tikka with Green Chutney and some grilled Onions & Bell Peppers.

HOW TO PREPARE PANEER TIKKA MASALA

After grilling paneer pieces with onions & bell pepper. The next step is to make Indian Masala by frying onions & tomatoes with some cashews and grind it into a fine paste. Then add some spices & cream to the recipe for the curry.

Next, add grilled Paneer pieces to the curry. This whole process gives a nice creamy curry. And also gives a nice aromatic flavor to the recipe by adding Paneer Tikka in it. 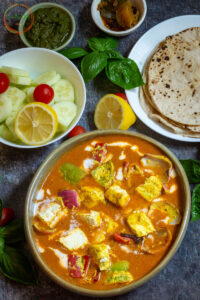 After marinating for 30 minutes, you layer Onion, Bell Peppers & Paneer in skewers. You can grill in any of these ways:

Indian recipes are versatile is you can change them as per your taste & flavor. To make it vegan, you can replace Paneer with Tofu. And you can also add coconut milk instead of cream along with almond/cashew paste. With only almond paste the curry itself feels creamy but to make it creamier you can add coconut milk.

Paneer Tikka Masala is not so healthy as it has cream and is made from butter. But to make it healthy I suggest don't add cream & butter. You can use a little amount of Olive Oil for making masala. Ans use ALmond paste or Almond Flour to make the curry creamy.

How to Make Paneer Tikka without an Oven?

As I have mentioned earlier if you don't have an Oven or don't want to use it then you can still make Paneer Tikka in Air-Fryer or on the stove. For making on the stove, just grease the skillet with some oil and add the skewers in it and let it cook by turning the skewers until all the sides are charred.

Can I Make Paneer Tikka Masala without Cream?

FOR MAKING ON STOVETOP

Grill Tikka in Air Fryer or Conventional Oven or on the stovetop using Panini Pan. Or you can also shallow- fry Paneer, Bell Pepper & Onion in any pan.

For Masala: Add oil in a pan and add sliced onions to it with Cashews, Green Cardamoms & Cloves. Once fried, add Tomatoes to it and fry for 5 minutes. Once Tomatoes turn mushy and oil starts to separate, grind it into a fine paste. Add Cinnamon to Onion- Tomato Masala and add Cream to it, and let it simmer. Add Tikka to the gravy and add Salt & Garam Masala to it. Serve it with any Indian Bread or Rice. 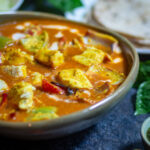 For extra color to the marinade, you can also add Paprika along with Mustard Oil. This combination gives a nice color and also gives a nice smoky flavor to Tikka. I usually grill the paneer pieces in skewers in either Air Fryer or Conventional Oven or even in Panini Pan, but you can also shallow fry all the pieces if you don't have skewers in any pan. To Make the Recipe Vegan: You can skip Butter & Cream in the recipe, and substitute Paneer pieces with Tofu. You can also enjoy Tikka with rice or in a roll, if you don't want to make Masala for the gravy. Take Tortilla or a Roti and add Green Chutney at the center, add some thinly sliced Onions and top with Paneer Tikka with some Mayonnaise. I have made this recipe in my Instant Pot Duo060 6QT 7-in-1 Multi Cooker and grilled in Panini Pan. Hope you'll like the recipe. Please leave the comment!
Nutrition Facts
Paneer Tikka Masala
Serving Size
4 People
Amount per Serving
Calories
431
Calories from Fat 342
% Daily Value*
Fat
38
g
58
%
Saturated Fat
17
g
106
%
Cholesterol
79
mg
26
%
Sodium
38
mg
2
%
Potassium
335
mg
10
%
Carbohydrates
13
g
4
%
Fiber
3
g
13
%
Sugar
5
g
6
%
Protein
12
g
24
%
Vitamin A
1533
IU
31
%
Vitamin C
37
mg
45
%
Calcium
332
mg
33
%
Iron
1
mg
6
%
* Percent Daily Values are based on a 2000 calorie diet.
Keyword Instant Pot, Paneer Tikka Masala, Panner Tikka
Tried this recipe?Mention @thisthatmoreworld or tag #thisthatmore!
For other Food Videos!Check out ThisThatMore!
Tweet
Share164
Share
Pin86
250 Shares
« HOW TO MAKE INSTANT IDLI
7-INGREDIENT SHAKSHUKA IN INDIAN MASALA »

Hi, I'm Gari! Welcome to my Blog! I'm a Foodie and a Mom to my 4-year old. I love cooking and making food for everyone and I got a lot of praise for my food over the years. So that inspired me to start my own food blog. Here you will find easy, quick & healthy recipes of different cuisines and mostly Indian using modern appliances like Instant Pot, Air Fryer, etc. I hope you will like the recipes posted on the blog as much as I do. Thank You for being a part of ThisThatMore Family!