Mexican Style Street Corns is a corn salad that is made by roasting fresh or frozen corns either in Instant Pot or in an Cast Iron Skillet until charred. Flavor them with some spices, lemon juice, and garnish with some veggies.

I am always a big fan of street food. Whether it's Pani Puri, Tikki Chaat, or basically any kind of chaat. When I ate Mexican style corn at a friend's place, it reminded me of popular street food of India - "Challi" or "Bhutta" (Indian roasted corn on the cob).

Indian corns are basically made by slow roasting the corn cob (white) on coal and then put masala (spice mix) and lemon juice on it afterward. The slow-roasting of the corns along with their spice mix gives these corns that unique and mouth-watering flavor.

One of the variations popular in India is " hot sand or salt bhutta". In this process, they cook the corn cob (whole corn - including husk & silk) in hot sand or rock salt. Because of the husk, sand doesn't spoil the kernels. And the slow cooking makes the corn really sweet. They use white corn for this. After removing the husk and silk, they use their custom made spice mix. I usually mimic this technique by microwaving the whole corn (including husk & silk) for 2-3 mins and then cooking it in the cast iron utensil for the color.

Some also prefer roasting the corns in a conventional oven, either with husk or wrapping in an aluminum foil. But let me tell you the best flavor comes when roasting in Cast Iron Skillet, it gives nice charred color & flavor to the dish.

HOW TO MAKE MEXICAN STREET CORNS

STEP 1 - COOK CORNS: Firstly cook fresh or frozen corns in Instant Pot or in the Cast iron Skillet. You can make this recipe using whole cob or using corn kernels.

STEP 2 - ADD SEASONING: Next once corns are cooked, add butter and mayonnaise in the corns along with some spices.

Corns are considered to be a rich source of fiber and also helps in eye development. This recipe of Mexican Street Corns is not healthy as it has butter and mayonnaise in it.

Mexican Corn Salad is traditionally grilled and often served hot. But if you're late, you can also serve as cold. This is often accompanied with tacos or burgers, etc. Leftover Elote can also be added as a stuffing in rolls or tacos or burritos. 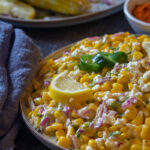 Gari
Mexican Style Street Corns is a corn salad that is made by using either fresh sweet corn or frozen sweet corn in a Cast Iron Skillet, and then roast them until you get the charred flavor and then coat them with sour cream and some spices.
No ratings yet
Print Recipe Pin Recipe
Share by Email
Prep Time 5 mins
Cook Time 10 mins
Resting time: 10 mins
Total Time 25 mins
Course Snack
Cuisine Indian
Servings 2 people
Calories 223 kcal

HOW TO MAKE MEXICAN STREET CORNS IN AN INSTANT POT:

HOW TO MAKE MEXICAN STREET CORNS ON STOVE-TOP:

HOW TO MAKE MEXICAN STREET CORNS IN CONVENTIONAL OVEN: