This recipe works well with any colorful pepper & tastes just too amazing. You can experiment with different flavors & ingredients and add the stuffing of your choice to the peppers. It is healthy & you can easily make it in Instant Pot or in the oven.

Stuffed Bell Pepper is my family's favorite weekend brunch option. The combination of quinoa with beans and veggies makes the recipe so flavorful & delicious. You can also add leftover Burrito Bowl as a stuffing in Bell Peppers.

HOW TO MAKE STUFFED BELL PEPPERS

Can we cook Stuffed Bell Peppers in an Air Fryer?

Can we freeze the peppers?

Yes, we can freeze stuffed pepper for a couple of months. Once the peppers cool down and are at room temperature, then store them in a freezer-safe container. You can also store in Ziplocs or wrap in a cling wrap and store in the freezer.

Most recipes call to layer stuffed pepper with a generous layer of cheese. But to make the recipe healthier, I have not added cheese to the recipe. Adding quinoa as a stuffing also makes the recipe protein-rich. So this Quinoa Stuffed Bell Peppers recipe is definitely a healthier option. 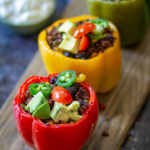 Gari
Quinoa Stuffed Bell Peppers can work well in all meals. You can have them for breakfast, lunch, or dinner. Stuffed Bell Peppers are the best way to enjoy all the colorful veggies. It is made with quinoa/rice, beans, vegetables, and some flavorful spices.
No ratings yet
Print Recipe Pin Recipe
Share by Email
Prep Time 15 mins
Cook Time 30 mins
Resting Time: 10 mins
Total Time 55 mins
Course lunch, dinner,
Cuisine Mexican, American
Servings 8 people
Calories 252 kcal

HOW TO COOK QUINOA:

HOW TO MAKE STUFFED BELL PEPPERS IN OVEN:

HOW TO MAKE STUFFED BELL PEPPERS IN AN INSTANT POT:

Hi, I'm Gari! Welcome to my Blog! I'm a Foodie and a Mom to my 4-year old. I love cooking and making food for everyone and I got a lot of praise for my food over the years. So that inspired me to start my own food blog. Here you will find easy, quick & healthy recipes of different cuisines and mostly Indian using modern appliances like Instant Pot, Air Fryer, etc. I hope you will like the recipes posted on the blog as much as I do. Thank You for being a part of ThisThatMore Family!